Two weeks ago I saw my first few calls coming in about a termite swarm in North Carolina. It was the middle of February and to say this is extremely early is an understatement. Normal sightings would be around April. I mentioned in my last post that we’ve had a mild winter which has had a knock on effect on the insect and animal world. 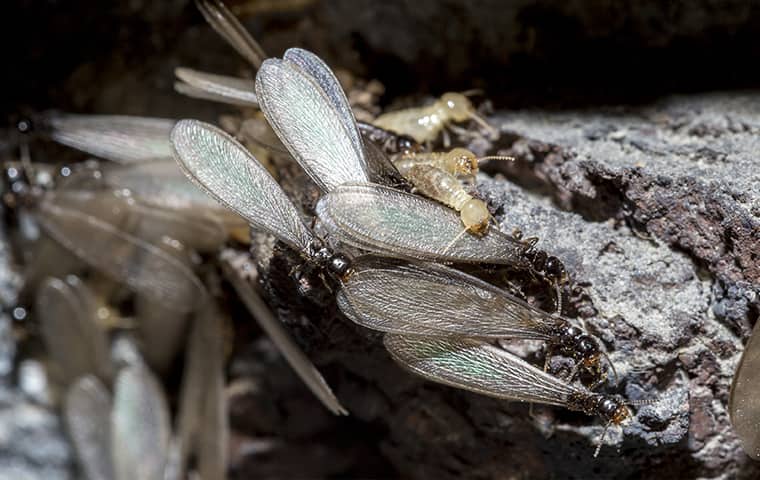 The fact that swarming termites have been seen already proves that. It’s not to say that you have to wait until you see swarmers to think you have termites. They can be present and you don’t even know it. Termites are a silent pest and cause billions of dollars of damage through the United States each year.

Well I guess you could describe them as maggots with legs. They are white in appearance and soft bodied. Many people confuse termites with ants but the most obvious one is that ants have a waist. If you looked at an ant and a termite side by side then the difference between each is very noticeable.

Termites, On The Other Hand

As mentioned earlier, they are a silent pest and you may not know you have them until the damage has been caused. This is why it’s advised to have effective termite treatment in order to protect your home or building structure. There are some termite signs that can indicate the presence of termites, but there are also other insects which infest wood such and beetles and ants, and not forgetting there are fungi which attack wood as well.

The main signs of a termite infestation are:

Mud tubes
These may be seen where they extend over concrete foundations or other exposed surfaces. They can also be seen in crawlspaces.

Wood damage
Any wood which has been seriously damaged by termites will break apart easily.

Swarmers
As I mentioned earlier, some of my customers have already reported seeing swarmers. Swarming termites are attracted to light and may be seen around windows, doors, light fittings and vents. Termite swarmers are the new king and queen of a new colony. They leave their current colony, looking to pair up with a mate. They then lose their wings and forage underground making a new colony. Discarded wings may be seen in areas mentioned above, and even spider webs.

There is no way to make a building “termite proof” but there are preventative and corrective techniques to make a structure less vulnerable.

Wood to ground contact
Remove any wood which is in direct contact with the ground. This provides termites with access to food, moisture and shelter as well as hidden entry into the structure.

Wood debris
Any wood, cardboard boxes, newspapers or other materials containing cellulose should be removed from around the building.

Moisture areas
Providing termites with a moist environment is just inviting trouble in. Any soil near the foundation should be graded away from the building. Any roof or plumbing leaks should be fixed. Crawlspaces should be dry and fitted with a vapor barrier to reduce humidity. Shrubs, vines, tall grasses and other dense vegetation traps in moisture. Remove any vegetation which is touching the building which will limit access for termites. Mulch promotes a moist environment for termites and should be used in moderation. Interestingly pea gravel is a bigger moisture trap than mulch and this should also be used in moderation.

For effective residential and commercial termite control services for North Carolina and Virginia, reach out to Four Seasons | HomeTown today!